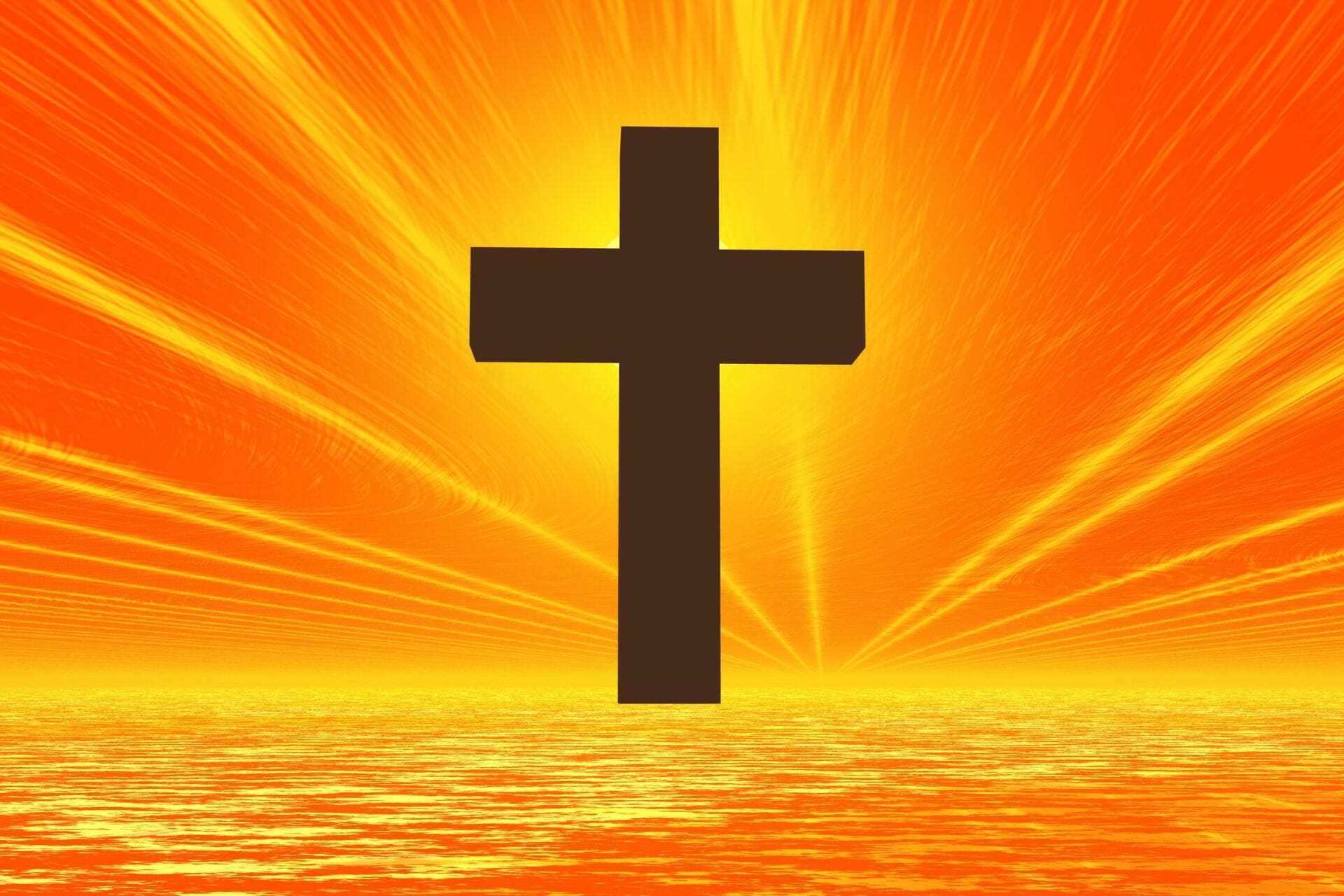 Christianity is primarily based on bhakti-yoga. Bhakti yoga means devotion. When any theology is based on devotion, then there always has to be the “I” and “Thou” aspect. This “I and Thou” aspect is very necessary for the wayfarer. For the person on the path has to have a goal, and what greater goal could there be than to discover the glory of the Lord?

Bhakti yoga, jnana yoga, and all these are combined in Christianity, but because of specific times and for certain people, certain paths were more emphasised. Bhakti yoga is essential for a person to be in tune, for bhakti is nothing else but devotion. One can never be devoted to something abstract. Therefore, we symbolise that abstraction or the abstract idea in the concrete form of Jesus, so there is someone that one could be devoted to or even worship.

For most people, this is a critical path, so what are the mechanics? That is what we have to discover. The mechanics would be simple, by strict observation of certain of the precepts, certain injunctions, and specific laws laid down to help us on the path.

These precepts cannot be determined generally, but it must be resolved individually, that how it applies to every individual that is on the path. Like if you were driving to Los Angeles, you know that you have to reach Los Angeles, and having the goal in mind you would know what road to take, and the road you take would be the one most convenient to you. If you live in downtown Los Angeles, perhaps another road would be good for you. If you live in Van Nuys, maybe there would be a shorter road to Van Nuys.

Bhakti, or bhakti-yoga, which is essentially Christianity, shows you all these various paths of devotion and worship. Therein is also contained a lot of ritualisms, and the person that has passed the necessity, that does not need ritual, can still be involved in that devotion.

Ritual plays its part, and the role it plays is that it prepares your mind, it brings you into a certain mood. You will find it in Hinduism and Buddhism as well; as you get up in the morning, you have your bath, which is a preparation for worshipping. Bodily cleanliness is important because you are going to sit down to worship and do your prayers. While you are having the bath, cleansing the body, your mind is also filled with the teachings of That, the “Thou” of God – so, it becomes a certain kind of conditioning.

With the Hindus, for example, the lamp has to be put in a certain place, and it has to be cleaned and polished personally. While you are doing all that, your mind is slowly led to higher and higher thoughts or better thoughts, and then you put your flowers down with that devotion. With this build-up that is taking place in you, you are tuning yourself; you are preparing your mind. Your mind is going into a devotional mood, whereby when you pray, the prayer becomes more effective. This we find in Hinduism, in the Catholic faith and practically in all other branches of the Christian religion. With this, one always has the glory and the majesty of God in mind.

You go to one city, and you do not like the city. Why? If you are at a certain stage of evolution and you go to a particular town which is, perhaps, incompatible to your vibrations, then you would not like it. It is not because of the buildings that are there or the gardens and the scenery or whatever. It is because of the emanations that are there. Because all the people involved, there might be bent towards a lot of permissiveness. Then all of these vibrations are totalled up into a collective consciousness, which, being incompatible to you, you want to get away. That is why many people like to get away from the cities and go into the country, where there are natural vibrations not interfered with by too many people’s thoughts and too many people’s vibrations. That is why you want to get away to the country. That is the real reason, the underlying reason. It is not running away from the job or the home. But inwardly, subconsciously you want to get away to something purer.

Man creates the personal God, but the impersonal God manifests the personal God. It is very important to understand this concept. Man creates the personal God and gives him all the glory and all the majesty and all the compassion. That is why when the great personage descends to Earth, he finds it very hard. That is also what we know as the suffering of Christ. Here in that freedom, enjoying the totality of the vibratory value of the entire universe, he has to condense all those energies into a little frame. Going from that vastness, like a vast funnel, like an ice cream cone, this vastness, to that little outlet down here which is the body. Those, in Sanskrit, are called the Avataras or the incarnations of God. This is true and possible.

Yet having come down in this little frame, he is subjected to the laws of opposites that govern this particular world, and he is involved in all these various laws. He has to, otherwise, he cannot function as a normal human being, and they show their normality, their ordinariness in so many, many different ways.

People do not understand what is meant: an eye for an eye; a tooth for a tooth. No. They do not believe in that. Jesus tells the prostitute, “I forgive you, my daughter – but sin no more. Be on your way.” He wines and dines with the Pharisees, the moneylenders because he knows that this world will always have that.

There is a certain percentage only that could be brought to a deeper understanding of the glorious life to preserve the balance. There has to be that balance, or the see saw will just rock up and down and up and down and up and down. A certain equilibrium has to be maintained, and there comes a time in history, in our time, man’s measured time, when there is greater weight on one side because of the totality of vibrations, emanations created here. Then that avatar takes on birth again to bring about the balance.

A balance has always to be preserved within conflicting values of the world’s function and world’s functioning. That is the glory of God. That is the glory because through that glory, through that compassion, an equilibrium is maintained to a greater or lesser degree. When things become terrible, then from age to age, as the Gita would say, he is born again and again. Same energy in different forms and that energy of the personalised God represents the sum totality of the emanations of this universe.

THERE ARE OTHER PLANETS, OTHER UNIVERSES

In this universe, people say that man is the highest creation. That is one of the most prominent bluffs one can consider. In this world, yes, perhaps, because we have thinking ability. But as far as the universe is concerned, no. There are other planets in the universe that you can go to while still in this body through deeper and deeper meditational practices, where people are much more highly evolved than us. If you have reached the entirety of the limitation of what this world can provide for you and how far it can let you go in normal ordinary evolution, then you would surely be born onto a planet that has people of a much higher vibratory level of existence, and the higher the vibration, the greater the evolution. There are planets in this universe where verbal communication is not even necessary. It just works on that you think something, and you have the thought, and a response is made instantly. There are other planets where there is not so much hate, where there is far, far greater love.

Two thousand or five thousand years ago, people were the same as they are today. They still had their covetousness, avarice, selfishness, and these things. It was there all the time. Today man has advanced a lot technologically. That does not mean that man has evolved more.

The technology can be used for more significant destruction. We see this in the world all the time. Look at the turmoil in the world, riots and killings here, there and everywhere. So, some spiritual force must arise to bring about a balance to avoid entire destruction of this planet, for it will have a reverberating effect on the whole universe. The whole solar system can be disrupted, and then the reverberations would extend to the entire galaxy. And on and on and on it goes. That is why all these theologies, all these teachings are necessary.

WE GO DOWN TO BASIC TRUTHS

All these theologies are necessary because all people do not have the same temperament of mind. What we do in our teachings is, to sum up, the totality of all these theologies and go down to fundamental truths, and then follow your path. That is what we do. All these happenings in this world are none else but the glory of God. Everything is glorious. The worst person that we could conceive of is glorious too. Perhaps a piece of pure iron covered with a bit of rust, and what is wrong with the rust? The poor piece of iron was laying outside and weathered by all the storms, rain and sunshine – been through purgatory for all this rust to gather there. What is wrong with that?

Therefore, we have pity for the so-called downfallen. Do you see what beautiful purpose all these things serve? It is all glory: nothing but the glory of God. Every happening is because of the glory of God.

ALL IS BUT A DREAM – THE GLORY OF GOD

When we reach the impersonal God, all this seems such a play. It is just a play. A dream from which we have awakened. Because that impersonalised God, into which we finally merge away, knows of no attributes. You are beyond all attributes, and when you go beyond attributes, all this seems like a dream that we have passed through. How real and vivid a dream it is while we are in it! A tiger is chasing you, or a murderer is chasing you, and you feel that fear within you. That is what we are doing: we are dreaming. We are involved in a cosmic dream. That too is the glory of God – but to be awakened is to merge away into that Impersonal where the dream just ceases, and it all begins all over again in the next cycle. Everything happens in cycles. One cycle starts and ends, and another cycle begins, but to end again. That is the glory of God, forever an ongoing process. So, if it is a forever ongoing process, it is eternal. That is why even the personalised God is eternal, and you are eternal too. No theology disputes this.

In the path of devotion, you reach the stage where you feel insignificant, but to go a step further and feel that you are all-significant. For Divinity always has the last say, and who is saying it? You are saying it without words. The inexpressible last word. That was the word in the beginning, and the end too is the word. The word is God. Unspoken, unheard, but so deeply experienced, so deeply felt.