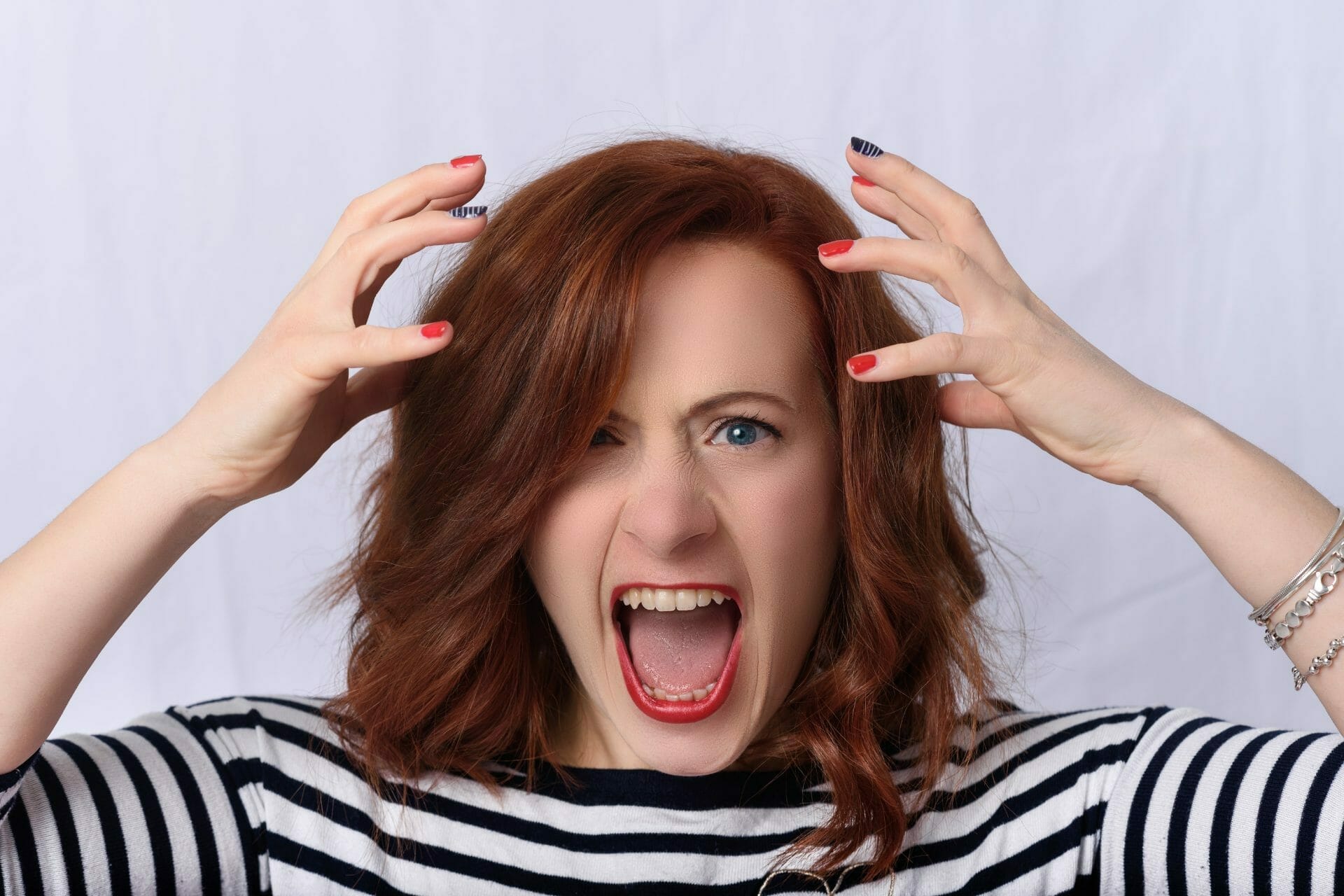 When we are angry, there could be many factors involved, a combination of factors, in producing the anger within us. We could ask the question, “who is angry”? Is the real I in me angry, or is the superficial I in me angry? When we can discriminate which part of us is angry, anger will disappear, because invariably you will find that it is your little self, the little conditioned mind, that becomes angry. The inner I, the big I, is forever still, tranquil, unmoved by anger or anything else.

A Chinese proverb rolls your tongue nine times in the mouth before you say an angry word. Invariably you will not say what you wanted to say. It means that give it some time and reflect upon it, and the anger would disappear with reflection. So, there is no question left of suppressing it or expressing it.

Many human beings act very impulsively. Why are human beings impulsive? It is because they lack the essential tranquillity within themselves, and therefore they become impulsive. Consequently, they do not give the mind a chance to think. They act with a kind of built-in reflex action. They have been used to becoming angry over a long period. So, when circumstances happen, immediately the outside circumstances associate themselves with the conditioned mind, which is full of impressions, knows all the tricks of anger, and immediately the external circumstances associate itself with that which is inside the mind impulsively triggers off anger.

ANALYSE ANGER FROM THE OUTSIDE TO THE INSIDE

But if we can create the analytical process from the outside to the inside, that would require time, and that is where rolling the tongue nine times comes into play. The idea is not to turn the other cheek; the idea is not to suppress the anger. Turning the other cheek can come about in two ways: cowardice and absolute kindness and understanding.

When we turn the other cheek, then we are not angry – anger has disappeared, because when anger has disappeared, the mind is given a chance to think, and when the mind thinks, then you will say, “what has called this about? Let us give the boy the other cheek. Let him have the pleasure of slapping me again; after all, who was hurt? This little body? Is that all that is hurt? And how important is this body? But I, my inner self, am I hurt?”

The mind would probe these questions, and it becomes effortless to give the other cheek because the mind is now tranquil, and it is only the tranquil mind that can act sensibly. So, you can do it with absolute kindness and understanding because at that moment, the mind will start thinking, or the Heart will begin feeling the condition of the slapper, of the one that lifts his hand, and immediately we would feel that person’s Heart. Why has he raised his hand? What is impulsive in him lifting his hand? What is going through his mind? And when one can understand that, as the man who raises his hand, his hand will freeze in mid-air.

This I tell you from a very personal experience. This does not apply only to a human being or their relations between one human to another. I was going once to Almorra, which is a station very high up in the Himalayan mountains. I was about eighteen nearly nineteen, and I had to go nearly sixty miles through a forest all alone in broad daylight, and while walking through this forest, I was confronted by a tiger. Someone would say that it is a ferocious tiger, but I found it a kind tiger when I looked at it. I had no fear of it because instinctively, intuitively, knowingly perhaps if you want to use that word, I felt that this poor little cat could not hurt me, why should it hurt me in the first place? If it requires this body of mine to feed itself, by all means, let it feed itself. Do I not feed myself upon other things? All the fruits, vegetables, and nuts I eat also have a specific form of life. I feed myself every day on life itself, so if this tiger wants to feed upon me, then why should I resist? And, in the flash of the moment when all this was clear to me, I looked at the tiger, straight in the face, and I could just see kindness in the eyes of the tiger.

For me to see the kind nurse in the eyes of the tiger, I would have to have a certain measure of kindness myself. When that appeared, there was no fear. When an animal attacks, you always remember it is because it picks up instinctively the fear you have in you and the animal attacks you because of the fear in you: it also feels fear. When the animal starts fearing you, that is the time it will attack you. Here the animal instinctively found kindness, love. So, it looked at me for a little while and turned around, and off it went, just like that.

Fear and anger are blood brothers. Anger comes about, and the basis of anger, the inner core of anger, usually is fear. We become angry because we fear something. A man becomes angry with his wife because he fears that the wife has done something wrong. What does that show? The cause of that fear is a form of insecurity or a feeling of inadequacy. That is why he fears: he feels insecure, and insecurity breeds fear, which breeds anger.

All these negative qualities are interrelated, and all positive attributes are interrelated. There are only two things: positive and negative, and within those categories fall all these various kinds of emotions. When a man becomes fearless and fears nothing, he has no cause left for anger. Because he realises that the anger is superficial, and we all know how long anger can last. You can be angry for five minutes, ten minutes, one day, two days, but you cannot be angry forever. If you are angry for longer than three days continuously, you will very quickly reach the asylum! This is true.

Because the power generated by that anger would be so powerful that it will disturb the entire brain’s chemistry, it contains within itself a very high voltage, and that very high voltage will blow you up! That is how you land up in an asylum. Therefore, even in our anger, you would find the anger lasting for a certain period, and after that, another emotion will occur that will counterbalance the anger. So, suppose we have that we gradually gain through our meditational practices, that we assess and evaluate the situation at its most whole value. In that case, we see the whole range, and no place for anger exists.

WE DO NOT SUPPRESS ANGER

According to modern psychology, it could become very dangerous to suppress anger. Any suppression can lead to various forms of inhibitions, and anything suppressed, like a buried weed, will shoot out again. Never mind how deeply you bury it; it will still erupt as a weed again. That anger that is suppressed will manifest itself in some form or the other. The person used to suppress his anger might develop some form of psychosomatic disease, and psychosomatic disorders can affect the whole physical organism. So, suppression is not to be advocated.

As I said, and I repeat, it can cause so many different kinds of inhibitions, and all inhibitions are never evolutionary; they can be very destructive. So, we do not suppress anger.

Some say that Buddhism teaches the suppression of anger, but Buddha never meant suppression. But because of the difficulties of translation, words get used. There are so many words in the Pali language or the Sanskrit language that are beyond all translations. They just cannot be translated. There are even certain Sanskrit sounds that cannot be spoken in English. In Sanskrit, we have four s’s; in English, we have one. In the English language, we have twenty-six letters in the alphabet, while in Sanskrit, we have fifty-one.

Buddha never meant the suppression of anger. What Buddha meant was control of anger. The method for controlling anger is to control the origin of anger. When we go back and analyse the cause of anger, the cause becomes so unimportant, then all the impact of the anger is lost, and there is no anger. The process is the same as what Christ said, and there is no contradiction. There is no contradiction, just a different way of putting it. Christ would say it is by understanding the cause of the anger, Buddha would say control the anger, and you can only control the anger if you understand it – the same thing, no difference whatsoever.

ALL RELIGIONS ESSENTIALLY TEACH THE SAME

When you study all religions to their most advanced level, the teaching is essentially the same. Whatever I am telling you today or any other day, it is nothing new. I only put forth old teachings, perhaps in a way that people gathered here might understand it. Then again, teachings, the true meanings of teachings, have been lost in interpretation. How many interpreters are so pure enough to portray or give forth the real meaning of what was said?

I will go back to Sanskrit. There is one word that has two meanings. One meaning is barley, and the other meaning is sheep. Some of them have got the wrong horn of the bull and started animal sacrifices. They started animal sacrifices at the Temple of Kali, where the sheep were sacrificed. What was meant was that in those sacrificial fires, what were given as oblation was supposed to be barley and not the killing of those poor sheep. We know how language degenerates. Things that could have meant something different, words that meant something different, mean so different today. Some words have taken on the opposite meaning from what they were initially intended to mean.