With surrender comes a sense of peace. With the surrender, one understands that a greater force than I have taken over my life.

Now, there are so many benefits to it.  By accepting that a greater force has taken over my life, I’ve surrendered my life to that greater force; the first thing I will lose is fear. And by losing fear, we would lose the sense of insecurities, inadequacies, and various other negative things. We lose that sense because this life now is not my life. He is the life.

Another thing that happens in this injunction when we say that not my will, but thy will be done, then the emphasis is not put upon our small egos.  The emphasis is placed upon Divinity that knows all, does all. We could not even lift a finger without the force, or power, of that Divinity. So, the troublemaker in life usually is our ego that thinks of just me and mine. So, when we accept the idea and live the idea that thy will be done, then the sense of me and mine is lost.  The sense of thee and thou develops.

Now, some psychologists will tell you that this is a form of escapism, where you shift things onto someone else. But that is not true.

Man is not capable on his own to reach salvation. He, to a certain extent, makes an effort. And to the greater extent, he has to rely on grace. And once accepting the principle of grace and that grace pours down upon us, then we cannot, but help say, “Thy will be done. It is thy grace. I am nothing. Thou art everything.”

What are we? A flash. Seventy years, perhaps, in this lifetime. If it is viewed from a different, higher angle, it would just be that, a flash. Yet, there is no single person in this world, or very few perhaps, that realises this. Every man lives in this world as if he is not going to die. Yet, the only certain thing in life is the death of that you can be sure.

THE MIND IS NOT IMMORTAL

Because of this sense, this inner sense within us, that I am not going to die. He lives his life so that all qualities of greed and lust and negativities accumulate in him because he thinks he will not die.

There is a basis for this assumption. Because within “Him” is “That” which is immortal. The immortality within man reflects itself through the mind, and the mind mistakes itself, because of the reflection, to be immortal. He has forgotten that I am not immortal, but my essence is immortal. Because of the reflection, he thinks that I am not going to die. He thinks that thought might not be a thought in the normal sense of thinking, but that thought is portrayed in his action. He does certain deeds, and he thinks that by building a mansion, he will use it forever.

THE ESSENCE WITHIN IS IMMORTAL

In the accumulation of material gains, he subconsciously feels he will enjoy it all the time. If he only could know that he is just a flash in the pan, and all these worldly accumulations are of no benefit at all. That could be very stagnating because the emphasis is placed on that which is temporary, rather than in essence within himself, which is changeless and immortal. Therefore, there is a lovely prayer in Sanskrit, “Lead me from mortality to immortality.” That is a world prayer that let me forget this mortal, little being and reach immortality, and one way of reaching that is to say, “Not me, but Thou. Not my will, but Thy will.”

When we lose our little wills and allow His will to penetrate, we can experience and enjoy immortality in this very physical body. We can experience and enjoy the immortal essence within us because by surrendering the mind and the body and the ego, we allow the Divine will permeate every cell of our body. It lights up our whole being, and everything becomes joyful. Those things which were distasteful to us before, now we see the essence of it. Our hatreds vanish because we ask, “Who am I hating? I, my, this, little self that is here now and gone tomorrow. Why should I allow that to happen to me? Why should I bring upon myself or engender these negativities and hatreds?” Instead surrender to His will, and automatically and spontaneously when His will takes over, if we should allow it, then these hatreds, the acquisitiveness, lust, greed, all these things disappear.

SURRENDER AND LET HIS WILL BE DONE

If a person is very greedy, he wants to accumulate, accumulate, even at the expense of cutting his brother’s throats. If he tries systematically to lessen the greed, today he is greedy for a million pounds, tomorrow he brings it down to nine hundred thousand, and the next day to eight hundred thousand, this does not work. Many have tried it; it does not work. If you want to chop off a dog’s tail, do not do it piece by piece. You hurt the dog. If you’re going to chop off the dog’s tail, chop it off at the root. Then once done and finished.

Like that, if one surrenders. Because if you want to try to lessen negativities step by step, your mind is involved, and when the mind is involved, it will always find justification. Why should I reduce tomorrow by a hundred thousand? Let me reduce it by fifty thousand. The mind would be there to justify all those things. The best is to surrender and let His will be done. That is a way – That is the life. Through that, we reach the truth. Because in the way and the life truth is forever inherent. But those that do not want to see will not see. Those that do not want to hear will not hear. Just so simple. 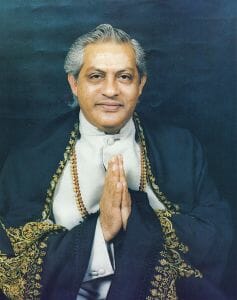