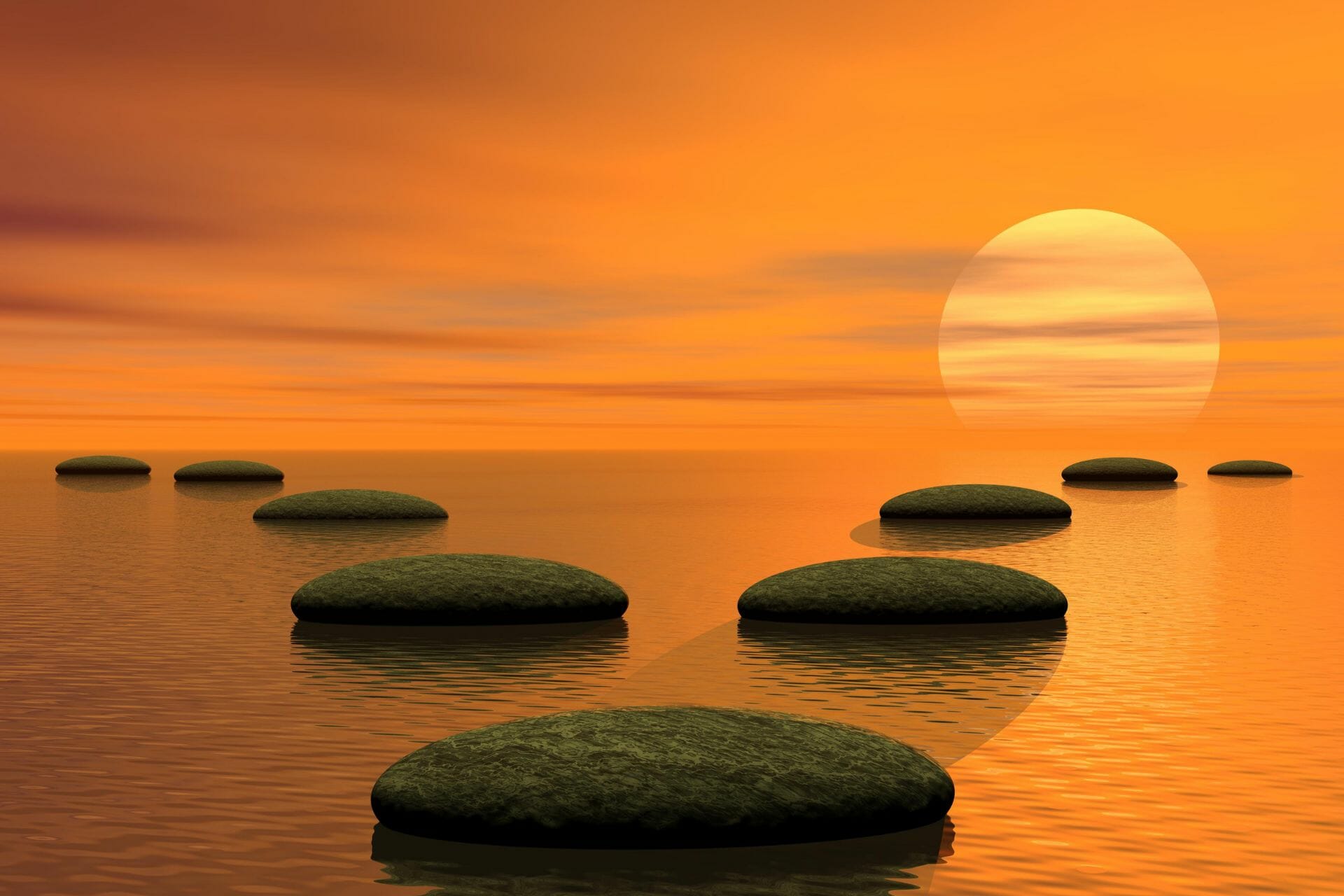 EVEN IN A PIECE OF ROCK, THERE IS LIFE

Even in matter, even in a solid piece of stone, in a rock, a subtle self is contained. Geologists have found various layers, and through the various layers, it has found how long that stone or that rock has existed. But it has not yet been able to measure the subtle qualities of the rock, which could linger on even after the rock is broken up into pieces. Even after it is powered up, there is some essence there which composes the subtle self of the rock. The grosser form of the rock, the mineral, also disintegrates and go back to its various elements. But the subtleness of that rock carries forward.

We think rock is inanimate, but there is life even in a piece of rock. If there were no life, then changes would never occur in the rock. You put a stone outside for six months, and the conditions of the weather will have some influence on the rock to change it. But if it had a quality of unchangeability, then all the outside influences would never be able to change it. It means that even in the so-called inanimate piece of rock, there is this receptive quality that could produce within itself all the changes. And those changes, that receptive quality or the receptive entity, is the subtle body.

EVEN MINERALS ARE EVOLVING

Not only a human being evolves, but even the mineral, the rock, is evolving. It has to reach a higher stage of existence which would be a plant. We know it has been measured that there is life in plant and that plants even have feelings. All these experiments have been conducted, and many of them have been conducted in America. This is all still part and parcel of the progress of the individual soul to self-realisation, to self-attainment.

Then from there, it has to go through the animal kingdom and the various species of animal life until it reaches man. The difference between man and an animal is just the ability to think, the power of discrimination. The animal functions more as if it is drawn on its path through a current which is pushing it on the path. It is within the force of this propulsion. But when that same animal evolves enough to reach the stage of man with his intellectual power, he can stop his progress; he can stagnate or make his progress faster. That is the advantage of reaching the stage of man.

The mineral, the plant, and the animal have to prod on and on without using any form of consciousness for its evolution. It is just drawn in this tide, this force of evolution that takes it on and on. Therefore, we regard man to be of the highest level, as far as we know, on this planet. That is why it is said in the scriptures that man is made in the image of God. The image would mean that man is capable of reaching self-attainment, which in turn means becoming one with Divinity.

One has to go through all these other kingdoms where the propulsion is just natural, totally natural and functioning with the laws of nature: the mineral, the plant, the animal. Having passed that, he reaches the stage of man, and he usually starts at the primitive stage. At the primitive stage, the whole thought, because of the animal background that he has come from, the whole thought is self-survival. The entire mind of primitive man is just for self-survival.

SOMETHING GREATER AND HIGHER

Through the process of evolution of the primitive man, and with him developing the various faculties of the intellect, he starts thinking and evaluating that, “All this is not the answer. There is something greater and higher.” That is when the intellect starts analysing things or the Heart starts feelings things that this is just not all. There is so much more.

From that point, an upward curve starts, and as long as man does not yearn for salvation, he cannot be sincere. He cannot be sincere in any spiritual practice. What counts most in any practice of this nature to reach self- realisation is the burning desire to attain self-realisation, and when this yearning comes about within man, he tries to find it. He tries to find it through the various teachings of the world, and the various teachings of the world must lead him to experience it. At first, you start with a burning desire to achieve, but when you have experienced it, then the desire to achieve becomes desireless. You begin with desire until you reach the stage of desirelessness, so even desire does not remain. Because desire too is a manifestation of the mind and created by the mind.

The idea here is this, that on the upward curve reaching back home, man also acts so spontaneously that his very action becomes the desire. His very thought becomes the desire, and the difference between desire and desirelessness is just this: lack of spontaneity. The one having desire is a conscious effort – conscious effort which is continually cognised and re-energised by the mind. But when one reaches a state of desirelessness, then his actions are spontaneous. Spontaneous within the framework of the desire of attainment. Yet the element, the burning power, of the desire has burnt itself out.

THE EGO WANTS TO PRESERVE ITSELF

When man has desire, he is still entangled in his ego-self. He is still enmeshed with the primitive instinct of self-preservation. We have reached a stage where we think that we are so far beyond the primitive man, but realistically speaking, we are not. Perhaps we have exercised the brain box a bit more, and are capable of analysing and thinking a bit deeper or at deeper levels, but that is not real evolution as far as the Spiritual Self is concerned, because we are doing precisely the same thing which the primitive man had been doing. The ego itself wants to preserve itself, and that is why all these attachments come about because the ego is always in fear of losing.

Really speaking there is nothing in this universe that belongs to us- nothing in this universe. We say, my wife, my son, my house, my car, my aeroplane. Nothing belongs to us because the ego itself is illusory. The ego itself assumes substance based upon that which is substanceless. It has no substance. The light that flickers is like a person living in the reflected glory of his master. In that sense, the ego lives. Enjoying the glory, it tries very hard to preserve itself, and it does not want to let go.

I have been called on several occasions where a man or a woman is past eighty, and there were a few past seventy, and the doctors and everyone gave up hope that “well, this is the end.” Yet the person’s attachment was so great and so deep to the ego and the life, and the life that was created by the ego, that it just did not want itself to leave the body.

I was called to these people, and the people surrounding this person said that we do wish that he or she would now leave the body instead of going through all this misery because the end has come.

I usually sit with the person, meditate a bit, and go into prayers and allow the subtle body to leave the grosser body as smooth as possible.

The ego seeks self-preservation, and that is non-different from the preservation that the primitive man sought. There is a difference, of course, in understanding, where the primitive man did not understand the subtle body. He only understood his physical body, and he tried to preserve the physical body. But modern man wants to preserve the physical body, and more so the ego body, and that is the most significant stumbling block in reaching the goal. In reaching back home, he is building walls around himself.

To reach self-attainment one has to subdue the ego self, which is the subtle self within man, and thereby reach home or self-attainment or self-realisation or total self-integration. And spiritual practices are the way to do that.

Reaching the stage of man, we have the necessary ability to discriminate between things, between right and wrong. The real discrimination lies in which path one must take for oneself to achieve the maximum. If one does not achieve the maximum in this lifetime, then there are many, many lifetimes ahead whereby he could do that, and be pushed along as the animal is pushed along in a natural current.

The reason why man yearns and seeks is to avoid all the unhappiness’s, all the miseries of birth and death. They are described as being not very joyous experiences.

Death itself could be a very joyous experience. That which makes it unjoyous is the attachment man has for that which he is going to leave behind. That makes the whole experience an experience which could be very unpleasurable.

Man clings to life even if he is eighty or ninety years of age. He still feels I want to live and live and live, and he will try to protect all his so-called possessions with all his power and all his might, and yet the very next day he would have to discard his body. So, what comes in the path of evolution is this attachment.

The subtle body is composed of the mind with all its attachments, and in its totalness, that becomes the ego. The subtle body, or soul, could also be called the ego-self of man.

When we say that for man to evolve, he has to annihilate his ego, the proper word would be to subdue the ego, not annihilate, because you could annihilate nothing. Once any thought or word is set into motion, it is set into motion forever, and it could reach the furthest extent of the universe as a whole.

In the process of subduing the ego-self, we are trying to find self-attainment. In this process the object is for the soul, the individual self, the ego-self, that is so enmeshed by its own doings, that is imprisoned by its own doings, that ego self wants to find freedom. The only freedom it can find is when it reaches beyond itself, and in reaching beyond itself it dissolves or is subdued, and that too returns to its original elements. The soul has to go through this process and needs this process to reach self-attainment.